In 2018, Central PA Conservancy acquired the site of the Letort Spring Garden Preserve. Now thousands of guests a year enjoy the former watercress farm as a nature preserve, historic site, and public park. It is complemented by connected lands and trails owned and managed by Cumberland Valley Trout Unlimited, Letort Regional Authority, Carlisle Borough, and South Middleton Township. CPC has made improvements to address destructive legacies of the formerly industrial greenway and to reclaim this special setting for public enjoyment and the protection of natural resources.

Come explore the wetlands, wildflowers, and wildlife that make this ‘Spring Garden’ exceptional!

At the headwaters of a famous limestone trout stream south of Carlisle in Cumberland County sits a natural wetland and ‘spring garden’. In addition to the plentiful natural beauty of the Letort Spring Garden Preserve, an 1881 Pennsylvania bank barn (now listed on the National Register), and associated 1820s springhouse, are major features of the Preserve. CPC plans to open trail segments and connections for convenient public use, particularly in connecting the barn to the Letort Nature Trail and the upper watercress beds. CPC is currently working to rehabilitate historic structures, improve access and interpretation, and restore native plant communities and wildlife habitat at the Preserve. The comprehensive restoration will create an exceptional natural area close to downtown Carlisle and near Boiling Springs, offering year round access to the general public and partner organizations.

The headwaters of the nationally-significant Letort Spring Run, a cradle of fly angling heritage, lies two miles south of Carlisle by way of the Letort Rail Trail. The Letort Spring Garden Preserve and surrounding land contain abundant limestone springs and seeps. The consistently clean and cold water at this location has driven trade, commerce, and settlement. James Le Tort, the first European settler, was drawn here to ‘Great Beaver Pond.’ Subsequent Scots-Irish settlers revered what they had deemed the ‘Bonny Brook’, the east branch of Letort Spring Run. Early Carlisle residents came to the meadows surrounding the Letort to picnic, and enterprising locals developed the site as ‘Moore’s Grove’ and ‘Bonny Brook Trout Pond.’ Once the South Mountain Iron Company built a railroad through the site in 1868, it served as the leisure destination for Carlisle. In 1892, the spring wetlands began to be converted to bogs for watercress cultivation. Over 100 years, that process gradually intensified, transformed the landscape, excluded public use, and lead to a devastating fish-kill.

The roughly two mile Letort Nature Trail bisects the Letort Spring Garden Preserve. The trail runs parallel to the east-branch of Letort Spring Run from LeTort Park in Carlisle to its southern terminus on South Spring Garden Street. A one mile extension to Heisers Lane in South Middleton Township is in progress. CPC’s partners are also in the process of completing an expansion of the rail-trail one mile further south from the Spring Garden trailhead. This will extend the trail toward Boiling Springs, the Appalachian Trail, and the Yellow Breeches Creek. Once restored, Historic National Register structures will have been rehabilitated, natural plant communities re-established, and citizens better connected to the outdoors at the Letort Spring Garden Preserve. 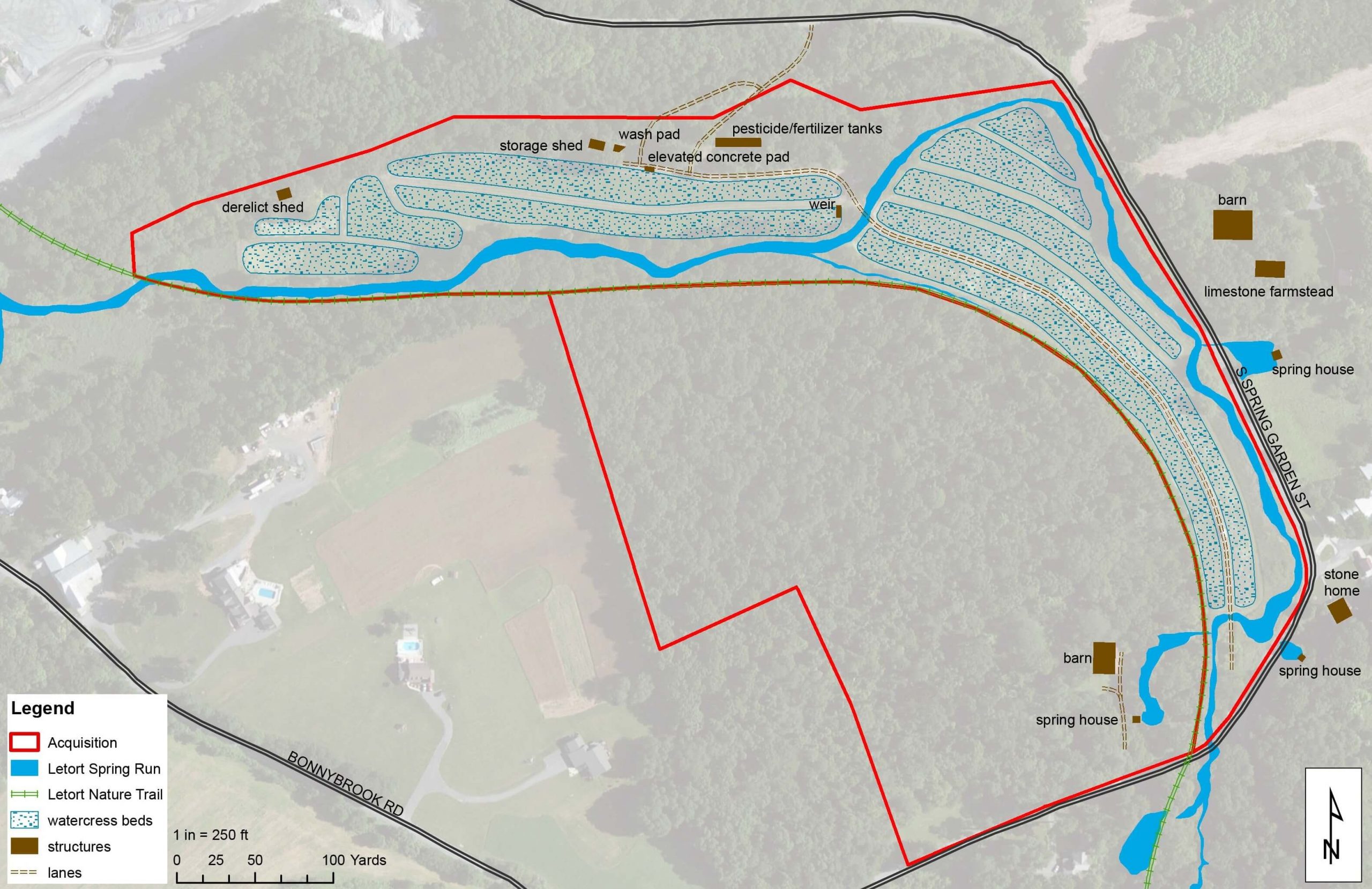 Our work would not be complete without the support of our community, stewardship volunteers, and local organizations. Here are some helpful links to connect with our partners: